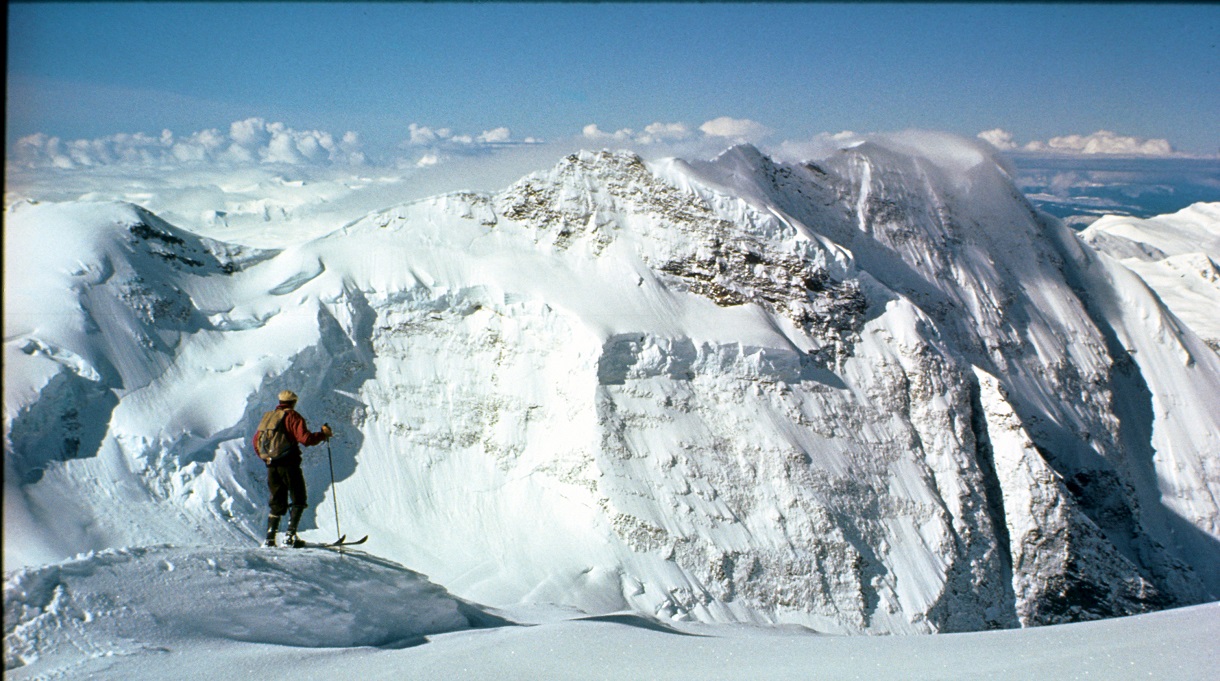 It must have felt a bit like discovering a new world. Once upon a time, the pioneering spirit drove Austrian Hans Gmoser to Canada with the aim of perfecting one of the most exclusive forms of skiing vacations: Heliskiing!

The helicopter took him to the seemingly endless mountain world of British Columbia. On the slopes peaks Gmoser discovered almost unlimited possibilities in terms of freeriding and powder. And at the bottom, the helicopter was waiting again to fly them up one more time. 50 years later, the core of heliskiing has hardly changed, only the accommodation has become much more comfortable. 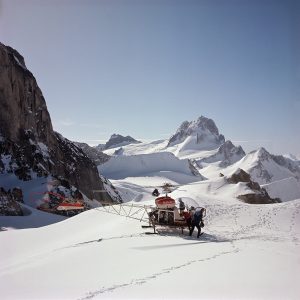 The loud rattle of the helicopter’s rotors heralds the adventure of heliskiing. When the skis and snowboards are stowed in the box and eleven excited skiers and snowboarders squat in the helicopter, the flying lift takes off. Soon after, they sit crouched on a summit plateau and try to make out contours in the swirling snow. Only a few seconds, then the helicopter tilts to the side and disappears in a rapid dive into the valley. Suddenly there is absolute silence.

Like flakes in a snow globe, swirling snow crystals dance in the sunlight. Around the small group with their guide is nothing but the white wilderness of western Canada. In the mountain ranges of the Monashees and Selkirks in British Columbia, no place, no power pole, no road disturbs the immaculate mountain scenery.

Heliskiing in Canada: The ultimate ski adventure for 50 years

Not a single track can be seen on the virgin slopes until the guide is the first to dive into the knee-deep powder. Then one skier after the other follows. Almost weightlessly, they glide through the dusting powder snow down into the valley, where the helicopter is already waiting. No sooner have they all climbed back into the helicopter than within a few minutes they are off again to another summit and into the next deep-snow slope.

„Descents in untracked deep snow are an absolute rarity for ski vacationers in the Alps – in heliskiing in Canada they are part of everyday life,“ Stefan Blochum sums up the fascination of heliskiing. The Bavarian is a heliskiing guide at the Gothics Lodge of Canadian Mountain Holidays (CMH). With eleven lodges in British Columbia, CMH is the world market leader for the most exclusive form of skiing.

From Austrian emigrant to heliski pioneer

Many consider Hans Gmoser, the emigrant Austrian and founder of CMH, to be the father of heliskiing, although others had experimented with the flying lift in the Alps and Alaska’s Chugach Mountains long before him in the 1950s. But it was Gmoser who perfected heliskiing and turned it into big business. To this day, heliskiing works worldwide the way Gmoser worked it out more than 50 years ago.

Today, heliskiing is every skier’s dream, but Gmoser’s first heliskiing attempts were a nightmare. In 1963, Gmoser was hired by Calgary geologist Art Patterson. The scientist had already used helicopters for his studies in the mountains around Banff and had come up with the idea of heliskiing as a business. As a guide, he hired Gmoser, who had already made a name for himself in Canada with first ascents, expeditions and self-made mountaineering films.

With a group of daredevils and skis provisionally attached to the helicopter, they flew to a summit near Banff. It took two hours to get everyone to the top. The Bell 47 helicopter was only a two-seater with just 178 horsepower. Once at the summit, the pioneers found crushed snow instead of the powder snow they had hoped for. With their 2.20-meter-long, thin skis, they repeatedly broke into the snow cover, which was icy on the surface, and fell. „Only Hans could ski that,“ Patterson once recalled. On their second attempt near the small town of Golden a little later, the small helicopter was blown off by fierce winds. Frustrated and a few dollars poorer, they gave up.

It was not until 1965 that Gmoser was persuaded again by the American Brooks Dodge. The former ski racer and two-time Olympic participant had entered the ski travel business and persuaded the adventurous members of a ski club to go on an unprecedented ski trip. Together with Gmoser’s company CMH, he organized the first heliskiing vacation in history in the spring of 1965.

Luxury and comfort are part of heliskiing

The first heliskiing accommodation had nothing to do with today’s luxury lodges. An abandoned sawmill camp in the Bugaboos mountain region between the towns of Banff and Golden served as the base. The icy wind whistled through the board shack with outhouse, and the guides and pilot slept on the floor in the kitchen.

Despite the spartan accommodation, the first heliskiing week in the spring of 1965 was a complete success. The pioneers were finally lucky: finest powder snow, a stable snow cover and imperial weather – the first heliskiing customers were overwhelmed. And this despite the fact that they had to wait forever at the summit because the helicopter still only had two seats. More than two descents per day were not possible, and in the whole week they only managed 15,000 vertical meters.

„Today, top riders can do that much almost in a single day,“ says Blochum, who as assistant manager of the CMH Gothics Lodge has completed millions of vertical meters. Still, the pioneers were overjoyed at the time because the helicopter flights alone in the high mountains under a brilliant blue sky were a completely new experience. And the view from the Bell 47, whose large round glass dome the pilots jokingly called a „goldfish bowl,“ was magnificent.

With eleven resorts in British Columbia, CMH is still the world market leader, but it is no longer alone. Heliskiing is also offered in Italy, Switzerland, Austria, Scandinavia, Kamchatka and Iceland. In Canada, as well, there are now dozens of heliski providers. Many were founded by Gmoser’s companions, who initially worked for CMH as guides. These include Austrian Mike Wiegele, who founded Mike Wiegele Helicopter Skiing back in 1970, as well as Swiss Peter Schlunegger with Selkirk Tangiers in Revelstoke and Rudi Gertsch with Purcell Heliskiing in Golden.

There is enough room for everyone in this huge province: British Columbia is almost three times the size of Germany, but has only 4.6 million inhabitants. The heliskiing areas leased from the government average about 2,000 square kilometers. The entire Arlberg region measures just 50 square kilometers. But while thousands of winter sports enthusiasts are on the move there every day, just a few dozen snow sports enthusiasts get lost in the huge heliskiing areas.

Heliskiing with large and small groups

CMH flies in most lodges with large Bel 212 helicopters, which are used as rescue helicopters in Germany. The large helicopters carry eleven guests and a trained ski mountain guide with many years of guide experience. In some areas, CMH and other operators also fly with small groups of only four or five guests. As a rule, small groups are a little faster and ski a little more.

The skiing procedure is the same for everyone. To guests, it may seem like just flying to any slopes, but guides and pilots leave nothing to chance. All landing sites and slopes are tested and mapped down to the last detail by the guides. There is no compromise on safety and no competition. Early in the morning, the guides analyze the weather and snow data, exchange information with the surrounding operators and then lay out the runs deemed safe for the day.

Before each descent, the guide checks the decision again; if he has any doubts, the slope is not skied. Despite the highest safety standards, however, there is always a residual risk. All guests are therefore intensively trained before the first flight for an emergency and equipped with avalanche transceiver (LVS), probe, shovel and radio. Many heliskiing companies also equip each guest with avalanche airbags, which use balloons inflated at lightning speed to keep a skier on the surface in an avalanche and prevent burial.

Thus perfectly equipped and prepared, nothing stands in the way of deep-snow fun. „Skiing in powder snow is easier than many think,“ says CMH guide Blochum. The wide special skis provided free of charge make it much easier. Thanks to the so-called „fat boys“, you literally float in the „powder“. This makes heliskiing much easier than it used to be with the „spaghetti skis.“ „I don’t even know why we didn’t come up with the wider skis back then,“ Hans Peter Stettler wonders today. The Swiss expatriate was one of the CMH guides from the very beginning.

With the long slats, skiing through the woods, so-called treeskiing, was something only for absolute experts. Natural slalom didn’t always go well, Gmoser’s companion Leo Grillmaier once recalled: „If we ever hit a tree back then, we were glad when the leg was broken and not the ski. Legs healed, but we couldn’t afford new skis.“

The new powder skis have made skiing in the woods and in powder much easier and have breathed new life into the industry, which had been struggling in the meantime. Heliskiing is no longer just for super skiers. „Anyone who can handle black runs in the Alps and has a decent level of fitness can heliski,“ says CMH guide Blochum.

The wide special skis make heliskiing possible even into old age. One of the oldest CMH guests in recent years was a lady from the USA who was over 90 years old. Hans Gmoser would certainly still be heliskiing regularly today, had he not died in a tragic cycling accident in Canada in 2006.

But his legacy remains. Anyone standing on the summit after a breathtaking helicopter flight, gazing into the mountain world of British Columbia and making the first turns in the dust-dry powder, will think of Hans Gmoser and gratefully thank him in silence or with a shout of jubilation for his pioneering spirit.

Thanks to the flying lift, normal skiers were able to ski down in an untouched wilderness for the first time – an experience that until then had only been granted to experienced touring skiers with good physical condition. „The fact that you can have this unique skiing and nature experience without the strenuous climb is the recipe for heliskiing’s success,“ Blochum says.

As soon as heliskiing was born in the spring of 1965, it boomed. The places were in such high demand that CMH left the sawmill camp after three years and built the world’s first heliskiing lodge of its own nearby. Soon, Bugaboos Lodge, which opened in 1968, was too small again. Instead of enlarging it, Gmoser built more lodges in other regions.