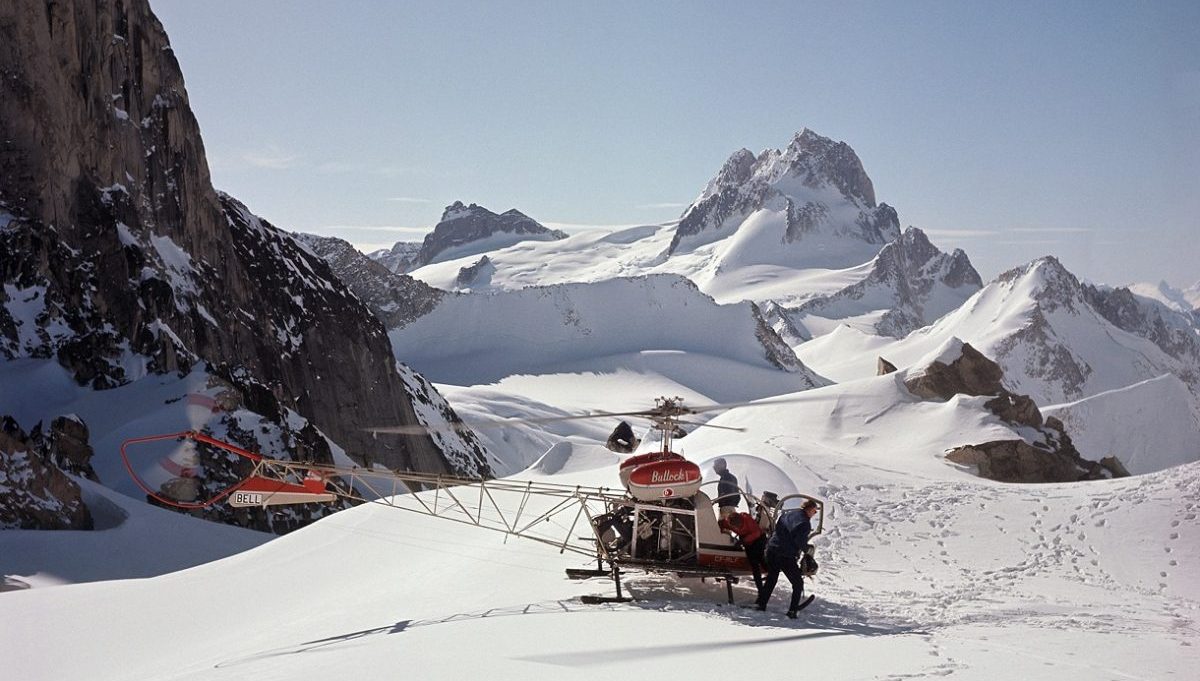 Heliskiing: how it started, how to do it and where it is best

Heliskiing is the big dream of many skiers: flying by helicopter to gigantic peaks and then wedeling through dusty powder snow. The Canadian province of British Columbia (BC) is the heliskiing hotspot of the world. This most exclusive form of skiing was invented there more than 50 years ago.

Actually, offers for heliskiing should come with a warning label. Not because it is so dangerous. On the contrary: heliskiing is probably the safest form of skiing in open terrain. But the warning would still be appropriate. Because heliskiing can be addictive!

Once you’ve climbed into the flying lift, you’ll want to take off again and again. The beauty of the mountains from the air is breathtaking, the skiing experience overwhelming. Helis often land on gigantic peaks in Canada to drop off winter sports enthusiasts in a seemingly endless, deserted, white wilderness. There the skiers, led by an experienced heliskiing guide, glide through dusty powder on immaculate deep-snow slopes down into the valley. And at the bottom, the helicopter is already waiting for the next powder run.

„“Dream descents are not the exception, but the norm““.
Downhill runs in virgin deep snow remain a rarity in the densely populated Alps, even away from the ski resorts. Just a few hours after the last snowfall, dozens of tracks mark the slopes. „“With us, such dream runs are not the exception, but the norm,““ says Beat Steiner. Steiner is one of the founders of Bella Coola Heli Sports, which was named „“best heliskiing provider in the world““ for the second year in a row at this year’s World Ski Awards.

CMH: Hans Gmoser is the „“Father of Heliskiing““

Founded in 2001, Bella Coola is still a relatively young heliskiing company. The first was Canadian Mountain Holidays (CMH), the market leader with eleven lodges in British Columbia. CMH was founded by heliskiing inventor Hans Gmoser. The emigrated Austrian is the „“father of heliskiing,““ even though others experimented with helicopters as flying lifts before him in the 1950s. But it was Gmoser who perfected heliskiing and turned it into a business. Today, heliskiing still works worldwide the way the pioneer worked it out more than 50 years ago.

Gmoser started his first attempts in 1963 with a few daredevils on a peak near Banff. It took two hours for everyone to get to the top, as the Bell 47 helicopter was only a two-seater. But instead of landing in the powder snow they had hoped for, the trailblazers landed in nasty quarry slush. On the second attempt near the small town of Golden, the helicopter, which only had 178 horsepower, was blown away by fierce winds. In 1965, Gmoser launched a new attempt for an American ski club. They took off from an abandoned sawmill camp in the Bugaboos, and this time it worked: thanks to powder snow and imperial weather, the first heliskiing week in history was a complete success, even if the pioneers only managed two runs per day and a total of 15,000 vertical meters. Today, around ten runs and 8,000 vertical meters per day are the norm.

Thanks to the flying lift, normal skiers were able to ski slopes for the first time that until then had only been available to highly fit ski tourers. In the following years, the helicopters became more powerful, the lodges more luxurious and safety improved. Shovel, probe and avalanche transceiver are mandatory for every heliskier. Many providers also supply avalanche airbags. The wide skis also offered in the lodges made deep snow skiing a playful pleasure even for ski normals.

Heliskiing around the world

This is how heliskiing became an export hit. It is now offered worldwide: in Iceland, Sweden, Kamchatka, Chile, Georgia, Turkey, Italy and India, and occasionally in Switzerland and Austria. In BC, there are now dozens of heliski providers. Bearpaw Heliskiing opened the newest heliskiing resort just a few years ago with an idyllic boutique-style lodge south of Prince George. Other businesses, however, were founded decades ago by Gmoser’s companions. Among them was Austrian Mike Wiegele, who set up Mike Wiegele Helicopter Skiing in 1970 and became a legend in the scene. His heliskiing village in Blue River is now the largest single heliskiing lodge in the world.

Small groups of up to eleven guests

Wiegele and some others continue to swear by the rugged Bell 212 helicopters, which were used in the Vietnam War, for groups of up to eleven guests. Others, like Bella Coola, Bearpaw and Northern Escape Heliskiing in Terrace, rely on smaller helis for four to five guests. „“Small groups are more flexible, tend to go a little faster, and therefore go more,““ explains John Forrest of Northern Escape Heliskiing, which operates in the particularly snowy Coast Mountains. Snowfalls of more than 20 meters per year are not uncommon there.

For all of them, the process on the mountain today is much the same as it was in the early years. To guests, it may seem like just flying to any slopes, but guides and pilots leave nothing to chance. Landing sites and descents are tested and mapped down to the last detail by the guides. Early in the morning, the guides analyze the weather and snow data, exchange information with other operators and then lay out the runs that are considered safe for the day. Before each descent, the guide checks the decision again. If he has doubts, the slope is not skied.

In terms of weather, only fog or a low-hanging cloud cover can spoil the heliskiing fun. Then nothing more goes. But these so-called downdays are rare. In central BC there are on average only five per season, in the Coast Mountains a few more. But providers like Northern Escape have a catskiing backup. If the helicopters have to stay on the ground, the skiers transfer to the comfortable transport cabins on the backs of the „“Cat““ snowcats – and on they go!

Thick snowfall, on the other hand, does not bother the helicopters. When the snow drifts, they ski in the sparse forests with their widely spaced giant trees. This „“treeskiing““ is especially impressive for Europeans. If you master the basic rule of not looking at the trees, you will quickly succeed in the natural slalom through the forest.

In general, heliskiing is not as demanding as many people think. Although there are extremely challenging areas and special „“Steep & Deep““ camps, in addition, heliskiing beginners will also find suitable offers. „“Anyone who can master black runs in a ski area and has a bit of fitness is good enough for heliskiing,““ says Beat Steiner of Bella Coola. And if you’ve perhaps even had a bit of experience off groomed slopes, you don’t have to worry at all. Except perhaps for the addictive nature of heliskiing.