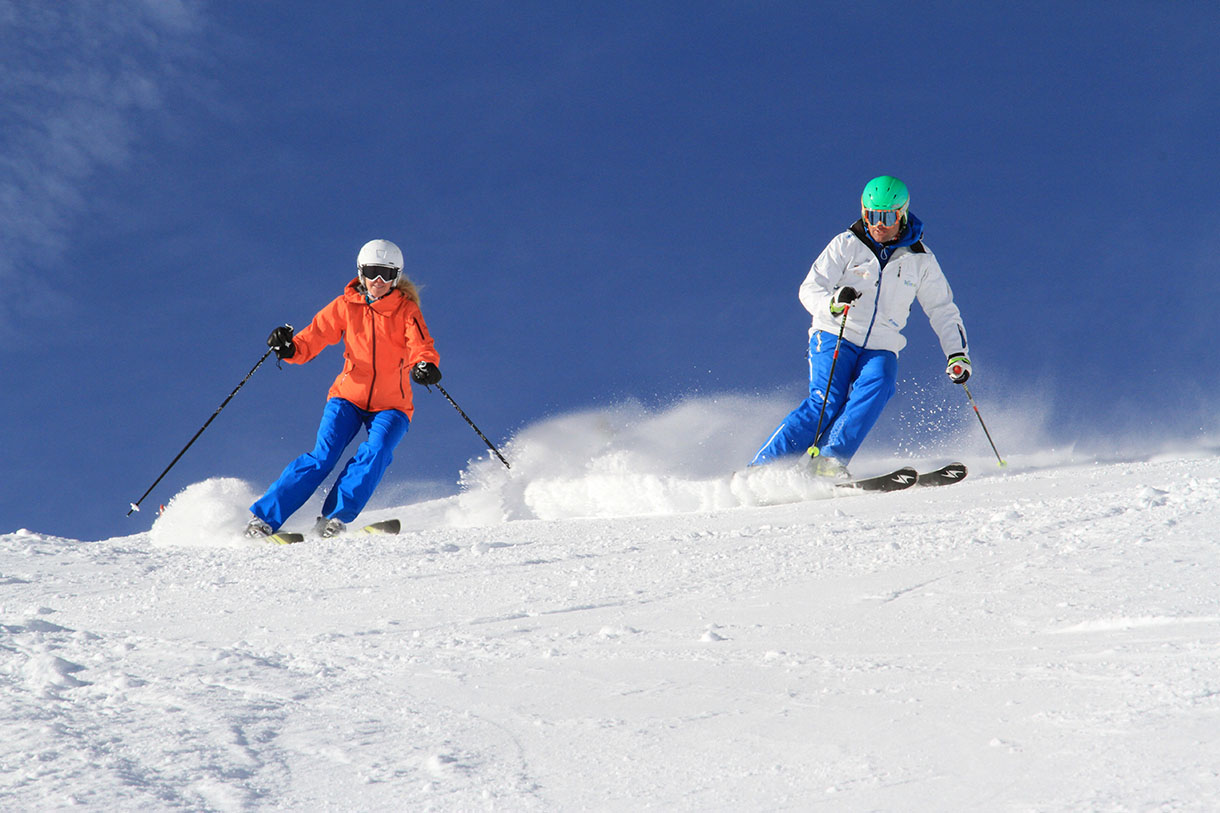 Winter, gorgeous snow conditions and an insane ski resort in the North American Rockies; the only thing that can ruin the day is the damn fear of that one steep slope that seems so beautiful and so scary at the same time. Ski KANADA, SKI USA and the experts from the German Ski Instructors Association (DSLV) give exercises, tips & tricks for tackling steep slopes.

Fear is annoying and something for bores… not at all! It protects us from danger and keeps us from doing stupid things. Sometimes it also gets in our way, for example when it comes to skiing down a steep slope. How good that there is a remedy. With these exercises you will overcome your fear and face the steepest slope with awe and the necessary respect, succeeding in the end and arriving at the bottom safe and sound.

In steep slope skiing, there are two main technical features that you should pay attention to and practice until exhaustion.

Tasks
– Whole group rides side by side: Who can stop fastest on command?
– Course with braking fields.

The whole group (grouse) drives at a slow pace in front of the hunter (slides sideways). The hunter is allowed to shoot the grouse with a stick touch, but only if the ski tips point towards the valley. In the end, the winner is the grouse that has changed direction the most and has been shot down the least by the hunter. The game can also take place with several hunters or in such a way that each shot down grouse becomes a hunter. The winner is the last grouse.

Partner stands at the end of the slope and directs with the sticks the respective direction of the exerciser.

The person in front of a group riding in a row shears off and gets back in line at the end of the group.

– Lane driving and shadow driving inside the lane and/or outside the lane; the goal is to pretend to be in the lane in such a way that the person behind has difficulty following (this exercise is not only possible in pairs, but also in threes).
– Course with longer single-leg passages.
– Course with obstacles to jump over.
– Flatter mogul course.
– Who can make the highest jump off the ground in the turn?
– Driving formations.
– Passing a ball, rope, glove to partner in each turn.
– Striptease – two partners ride side by side in sync, also taking off and putting back on gloves and jacket in sync. The other pairs judge.
– Course with changing radii.
– Driving through a funnel.
– Driving through an hourglass.
– Driving through alleys of different widths.

Next: The most common mistakes in steep slope driving and how to avoid them.