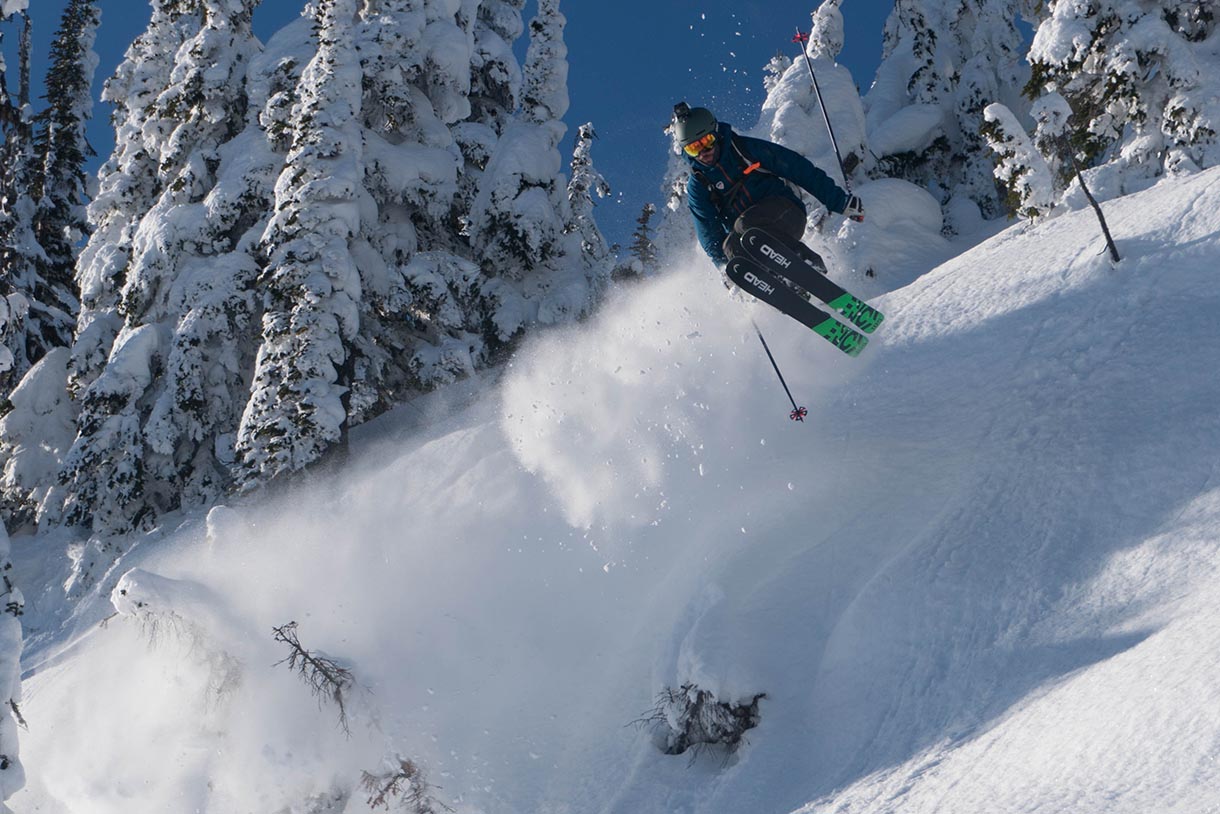 Catskiing at Mustang Powder: wild ride in BC

Catskiing is probably the most exclusive form of skiing after heliskiing. In the Monashee Mountains at Mustang Powder, it’s also one of the best in BC. Warren Miller’s filmmakers know this too.

Mustang Powder in British Columbia is not a catskiing resort like any other – not by a long shot! This is already proven by the season, which with 129 days is longer than anywhere else. This is also proven by the masses of snow with which the company is showered year after year. And it’s evidenced by the 443 kilometers of trails that cover an area of 1,200 square kilometers in the magnificent Monashee Mountains. Even the terrain is special. Those who travel here should be proficient with their sports equipment. Ski and snowboard vacations at Mustang Powder are not for everyone. And nothing for every Cat: even the high-horsepower machines were chosen for their ability to handle steeper terrain.

Of course, there are „“normal““ powder runs at Mustang Powder in open bowls or tree skiing. However, some runs are so difficult that they are only on the agenda when conditions are optimal. Generally, the guides only take experienced off-piste skiers. So if you expect a break after each run and would like to make a photo stop on the slope, you are in the wrong place. Despite all warnings, winter sports enthusiasts occasionally reach their limits. In that case, they sit out a round and accompany the Cat rider in the cockpit down into the valley – that can be a lovely winter experience, too. 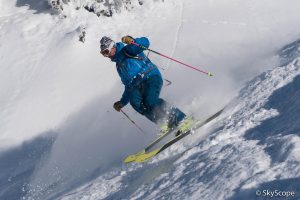 Glen Plake was spared this fate, of course. The exceptional skier last demonstrated his skills in front of the camera for Warren Miller’s film „“Timeless““ at Mustang Powder. The ski icon with the idiosyncratic hairstyle had the slopes almost to himself, but regular guests can also enjoy the area in small groups. In addition to the standard program aimed at twelve people, Mustang also has the Private package for six people on offer.

Stronger riders and smaller groups mean smoother operations, less time wasted loading and unloading the Cat, and runs finely tuned to the level of the riders. That automatically leads to more vertical meters per day – or vertical feet, in which North Americans reckon. With Mustang Powder’s groomers operating more than eight hours a day and scratching nine late in the season when it’s light longer, 20,000 or more vertical feet is not uncommon. Even 30,000 has been cracked.

This makes the thighs burn, and then the recovery must not come too short. At Mustang Powder everything is prepared for a relaxing end to the day. The gourmet menu includes four courses and the wine list selected drops from BC. Massages can be booked if required, and the hot water in the hot tub outside the door gets tired muscles going again. They’ll be ready to work again early the next day.

In the morning, it only takes five to ten minutes on the Cat to climb out of the cabin and plunge into the deep snow. Mustang Powder’s beautifully crafted wooden lodge is already situated at 1,740 meters above sea level, allowing not only for magnificent views, but also short distances to the first run of the day. Despite its remoteness, the lodge is quite easy to reach. From Vancouver or Calgary, take a domestic flight to Kelowna, from there take the Trans Canada Highway to the meeting point a good 40 kilometers outside of Revelstoke. 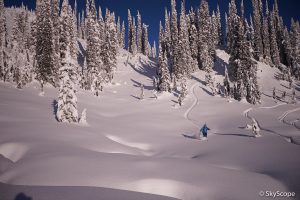 The location of his lodge was deliberately chosen by owner Nick Holmes-Smith, as was the name. The military rider used to compete for Canada at the Olympic Games. In summer, he breeds spirited mustangs in the valley; in winter, he takes guests cat skiing in one of the best tree skiing areas in the world. And both the horses and the „“cats““ promise quite wild rides in BC.

The name says it all. Whoever books this package will experience the most extreme sides of Mustang Powder. This small group adventure should only be taken on by those who are looking for real challenges and are not afraid of a little ski touring in between.

Catskiing at Mustang Powder: wild ride in BC